Dexterous hands in Europe and the United States had turned watches from a rich man’s dalliance and a sailor’s lifesaver into a fully fledged industry by the 19th.

Most of today’s most famous watch names were already established by the 20th century. Most, but not all.

Some of the quirkiest and desirably kitsch watches in the world today weren’t even thought of yet.

Timing is more than everything in the watch world, and the Russians showed up late to the party.

Nevertheless, opening your first watch-making factory in 1927 would have been suicide in any other country.

After 150 years of dawdling, Russia chose to finally join the watch-making countries of the world (with US tooling and materials) just before the arrival of the Great Depression.

Besides the lack of discretionary spending, the Great Depression was a period when everybody had so much time on their hands they scarcely needed watches at all.

But Russia wasn’t like normal countries and Communism saved the Moscow Watch Factory from what seemed like inevitable collapse.

It had a ready-made economy of scale in the Russian military, where the Commander was the officer’s watch of choice and its ties to the military remained strong until the fall of Communism.

It wasn’t alone, though. Chistopol opened in 1942 – again, a seemingly inauspicious bit of timing given the unpleasantness on Russia’s western borders – and turned into the still-popular Vostok.

There was a watch boom after WWII with the Pobeda (Victory) emerging from the Moscow Watch Factory (which was no longer made in Moscow, having escaped east during the Nazi advance) and the Sturmanskie for the military.

It all came to the attention of the west when Yuri Gagarin took his own Poljot Sturmanskie into space, while the first space walker, Alexey Leonov, took a Strela.

After that, of course, Russian watches boomed in popularity at home and in the rest of the world.

There was no tie-up between the space industry and the watch industry when Gagarin rocketed into space, though that quickly changed. Most cosmonauts since then have used the Poljot (“flight” in Russian) and Sturmanskie designed the new Mars in conjunction with the Russian space agency.

The exploration bug created two of the most collectible Russian watches, in the Sputnik and the Antarktida (for a Soviet mission to the South Pole).

Russian watches went their own way, design wise, but they were recognizably Russian in two different ways: they were always proudly sturdy, functional and legible, and the watch makers weren’t afraid to be kitsch and cute whenever they felt like it.

They love a chunky graphic, they often use straps that would be considered too clunky in the west, but somehow come together to work with their dials and cases.

You could buy a Russian watch in at least 70 non-Russian countries by 1965 and Vostok alone was shipped to 54.

The muddy waters of the post-war world effected the watch industry, too, with Poljot failing and Sekonda shifting production from Russia to Hong Kong. Ex-Poljot personnel bought the Moscow Watch Factory buildings and restarted production with the Volmax brand, but even they moved to Switzerland.

Two of the most famous brands survived and thrived, though, in Vostok and Sturmanskie, but there are others who’ve stepped up as well. Some use Russian movements, some prefer Swiss and others Japanese, but the designs are unmistakably Russian.

And they are almost always charming. 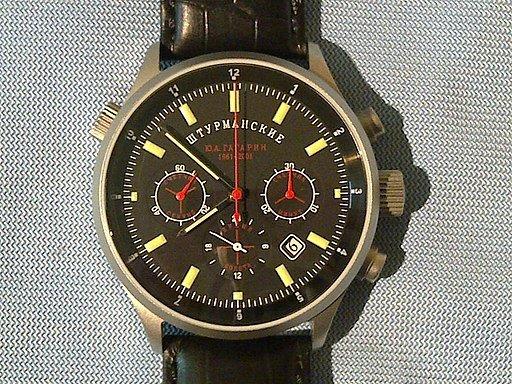 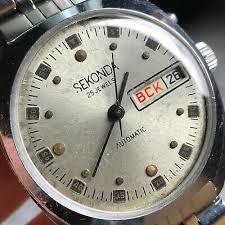