Wrist watches are inherently incredibly useful tools. The desired functions of watches have manipulated and altered the way modern watches are crafted and designed. The need to view the time in the dark is a simple notion but with a complexity that has been designed, redesigned, and reevaluated over the years as chemistry has evolved. On the one hand, wearers want a practical and functional wristwatch whilst also wanting the dial of a watch to age and patina in a certain way. The very nature of adding luminous materials to dials mean they will eventually dim to the point of complete uselessness. When it comes to low light conditions watches can admittedly become very difficult to read. Illegible in certain lights. The issue of legibility is as historic as wristwatches themselves.

The first solutions to the issue of legibility on wristwatches were recognised in the early 1900’s. The earliest practice of adding luminous materials to watch dials was around the time of the first World War. The first chemical creation and application of luminous materials produced a blue glow which has become incredibly desirable in vintage watches. Many high profile and recognise watch collectors will recall of situations where auctions where won and lost over the condition of the luminous dial. Even today, the conditions of vintage luminescent dials are discussed at length and can change the valuation of a vintage watch incomparably. 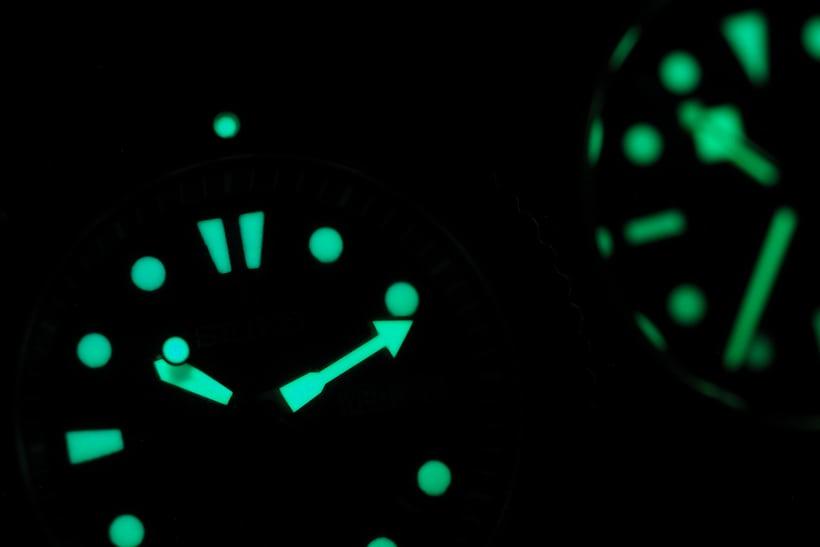 Throughout the years, the unhealthy levels of radium used to produce brighter dials became well known until the point in which the use of radium in wristwatches was banned altogether. In the 1900’s early use of radium was linked to the cause of death for many workers who were employed to apply luminesces to dials. The amount of radiation from the radium was low and did not affect the wearer of the watch, however it had catastrophic impacts for those workers applying the material using their bare hands and paint brushes. The radium would, in the course of painting the dials, paint onto the workers nails and with hand to mouth contract was subsequently swallowed in dangerous levels by these workers. A lawsuit was filed on behalf of the ‘Radium Girls’ and although many of the claimants were too sick to attend trial, they won. This was a significant trial putting the practice of watchmaking on the world stage. Even today, it is estimated that over a thousand buildings in Switzerland may be radium contaminated. This was one of the very few occasions the light was shone in a negative way upon the watch world.

If one understands the basic composite of the chemistry involved in lacquering dials with luminous materials it becomes easier to understand and establish the difference between different watch dials. The alternative to radium in the 1920’s was tritium. Dials using tritium were labeled accordingly to show the material was present within. This led to certain watches, including the Rolex Submariner (T) to become very collectable. Of course, the chemistry involved was simple, however obtaining a luminescence that lasted the duration of more than an hour became very difficult to achieve. The modern alterative to the radioactive cousin was photoluminescent materials. These materials need outside light source and charge during the daylight. The dial then glows brightly in the night having been charged up under directly sunlight. Many wearers of watches will note that by putting your watch under your nightlamp you will achieve an uncompromised bright glow. This of course fades but the time can be visible until the morning on many watches. There are of course issues with photoluminescent materials, one of which being the lack of brightness for prolonged durations. Super-LumiNova appears to be the ideal solution to this problem of nocturnal brightness but critics still argue that this material will breakdown eventually. Clearly the problem is yet to be solved.

Whilst the evolution of luminescent materials for dial application have changed over the years, the desire for bright and clear dials remains the same. Luminescent dials have truly revolutionised the functionality of the wristwatch, creating a new tool in its own right.

Luminescent watches flood the market and watch brands all across the globe have developed interesting and functional dials incorporating the luminescent feature. It would be fair to say, the introduction of luminescent dials changed the watch industry forever and will continue to be a talking point for all watch enthusiasts.